The Hingham Public Library and the Boston Classical Guitar Society are pleased to offer this season's concert series in a virtual way!

The concert will be performed LIVE on Zoom. To join us please register online, and we will email you the link shortly before the meeting.

After graduating from Berklee College of Music in 2000 as a Performance Major, Steve became a founding member of The Back Bay Guitar Trio. He has since toured Europe and North America, with 29 album credits to his name. Steve is currently teaching at The Ivy Music Academy in Norfolk, and recently completed The Interdisciplinary Music Studies Degree Program through Berklee Online, while recording and performing new music with Hypaspace and Hot Club de Boston.

He also performs and records with other artists in the studio, on the concert stage, and in the orchestra pit, including touring as a sideman with Tim Janis, Valerie Sneade,  and The Alien Blakkk. In 2004, Steve won the Northeast Regional Finals of Guitar Center's  National Guitar Competition.  In 2007 and 2008, he taught at Berklee College Of Music during Summer Guitar Sessions. In 2014, he received The Outstanding Arts Instructor Award from Bentley University in Waltham, MA.  In 2019, Steve performed with The Boston Modern Orchestra Project, The Cape Cod Symphony, and The Pro Arte Chamber Orchestra. 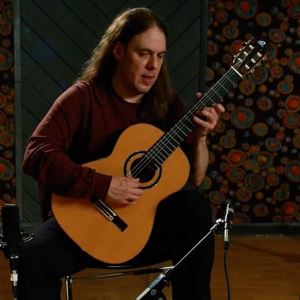 The following concerts from this virtual season are available to watch on the Library's YouTube channel!

The Hingham Library and the Boston Classical Guitar Society gratefully acknowledge the support of Coastal Heritage Bank for this season's concert series.